T is for tea and biscuits

I did a themed pack this week, based on tea and biscuits. Or coffee and biscuits. Whether in base or on operations, troops just love to have a brew and a biscuit and a moment to relax. The Army caters for that, providing the basics in every ration pack. However, my memory of rat pack coffee is less than pleasant - think the cheapest Maxwell House coffee that money can buy - and the biscuit is a cross between a big weetbix and shortbread. Those of you who may be used to a daily snack of Tim Tams and a soy milk latte with a twist of lemon would be sorely disappointed with what the troops are provided with.

Hence my desire to provide a small luxury - the best quality instant coffee that I could find, and some tea bags that are not too shabby either. The Robert Timms box ended up being too big to fit into the BM box, so I emptied all 28 sachets straight into the care pack. Due to weight restrictions, I could only send half the tea bags too. 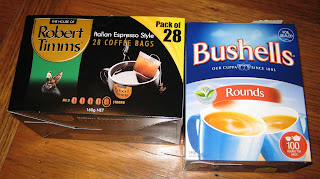 Some types of biscuits just won't travel at all well to a hot country far, far away. Chocolate coated biscuits will melt - Army chocolate has whey powder added to stop it from melting even at high temperatures - and fragile biscuits will end the journey as crumbs dancing around inside the packet. I stick to tough biscuits, such as ANZAC biscuits and gingernuts. 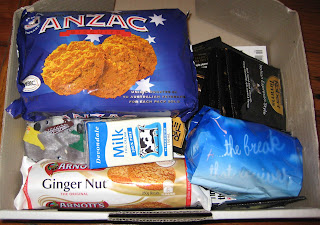 There are half a dozen magazines on the bottom of this pack - to provide some reading material during a tea break, and a small container of long life milk. Again, the rat packs contain a tube of condensed milk (which I used to suck straight out of the tube), but it's not the best for mixing with premium tea and coffee. I wanted to include a second container of milk, but the weight restrictions held me back.

I know this might sound like a trite package, but for soldiers used to a daily dose of Starbucks (or its equivalent) when at home, a tour without a decent coffee must seem like a very long tour. Sometimes its just about the little luxuries.
Posted by Boy on a bike at 9:30 PM

Don't forget to put any tea or coffee items that have been de-packaged for shipping purposes into plastic baggies.

Helps keep em fresher during the journey to receiver, and gives the receiver something to keep them in once he/she gets them.