I for Is it OK to take stuff out of packets?

Well, I dunno. Guess we'll have to find out.

I've bought some long life milk in packs of six by 200ml tetra packs to go with coffee bags. I reckon it'd be OK to pack say, two per box, or three. That same shop also had some long life thickened cream which will probably go nicely with the bottled fruit I found.... and if it's not able to be cooled down they can maybe cook with it.

Then there's things like packet soups... cuppa soup things. I'd probably take off most of the box, even though it is only a few grams it adds up when you're talking only two kilograms.

What kinds of cooking additives would be handy?

I've found some toothbrushes for a buck each in packs of two, I think I'd send them in the two packs... they are toothbrushes! I'd like to find some small packs of toothpaste, too, just to go with the toothbrushes.

I just look out for specials and buy them, like a packrat... I've become a packrat. No, wait. I was always a packrat.
Posted by kae at 6:30 PM 5 comments:

F is for found furry animals

Completely by chance, I happened to find a $2 shop today in Lane Cove today that sells just what I have been looking for - a pack of small, clip-on furry animals. A dozen for five bucks.

Finding them just took a bit of perseverance, and a bit of luck. I was actually searching for a cake rack (which I failed to find). I'm going to use four furry animals per pack until I run out of them. Or the kids find them.
Posted by Boy on a bike at 3:25 PM 8 comments:

F is also for furry animals

I have a question for the blogsphere.

I'm told that Australiana is a good thing to include in a care pack, as it can be used for trading with troops from other countries, or for giving to the locals as gifts.

I paid a visit to a tourist-oriented gift shop in The Rocks this week to have a look at what was on offer - I can't find anything that looks applicable in our local shops. I couldn't find anything that I thought was useful and appropriate. That might just be a function of my taste in stuff!

At the non-fragile, small end of the spectrum (as in stuff that would not take up too much space in a BM box), they had things like playing cards, key chains, stuffed furry animals, baseball caps, bucket hats and so on.

What would you recommend buying? I'll be down that way again next week, and need some suggestions.
Posted by Boy on a bike at 10:14 AM 3 comments: 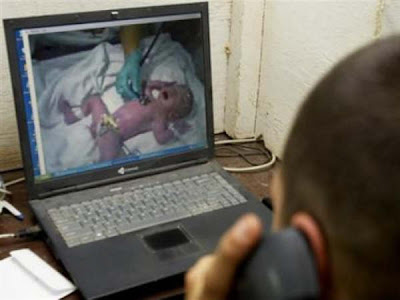 ...to be forgiving when someone says how hard it is to have a new baby in the house.

From Nancy Sinatra's site... go there, read the post.

F is for Furriner.

While we're all about looking after our diggers, there are still other countries out there who have troops in harm's way.

The Americans have a lot of support for their guys with groups like Soldiers' Angels and Any Soldier, but they're not the only ones in the world.

Last week I stumbled across Sending Kindness in Packages, for example.

For those readers in the UK who might want to do something for their own troops, you could always start at Support Our Soldiers, and an organisation for the Canucks*, courtesy of Mini Capt (from around the blogging traps is Chosen Soldier.

Now the Canadians and the Poms (and of course the Americans) aren't the only other countries with forces fighting over in the Middle East, but they are probably the best known.

Israeli forces might like a package, and over in the archives at Winds of Change there is a post with links for other countries. I can't testify as to the usefulness of the links yet, though, since I've not had a chance to go through them.

That's a project for the near future.

In the meantime, feel free to keep posting and showing our serving personnel that they're not forgotten.

Why send a Care Package?

Big news from me... I only have a week left in this job. I'll be on leave for a couple of weeks, then "Force Preparation" as I am deploying to the ME in July. I'm heading to the censored as a censored, and will be there for 6 months (at this stage scheduled to return to Oz in late January). On return I'll be take a couple of months leave as I have accrued a ridiculous amount (70 days) already, and will have even more when I get back.
I think they will send me back to sea after that, on a frigate based in Sydney.

So my upcoming deployment is a big focus for me at the moment, and I just had a look at your blog and to be honest it put a lump in my throat and a tear in my eye. It's a really nice feeling when you learn that there are a lot of caring people out there who are who are donating their thoughts, time and money to make the life of our diggers a bit more bearable whilst on deployment. My first couple of deployments (Kuwait and the Solomon Islands) went by without receiving a single care package, and I can tell you that it's an awfully lonely place when you are away from your family with limited phone and email contact. Even though you're usually surrounded by people, you often feel like you're out there on your own. (Rest assured, I have since educated Mum on what a care package is, and she now sends them to me regularly even though I am based interstate. At 26 years of age, I receive Express Post parcels through the Defence mail system with Aussie Flag and butterfly stickers all over them, with the return address marked as "Mum" with love hearts and kisses... much to the amusement of the staff who work in the mail room).
With the advent of email and skype, snail mail has been dying a terrible death, and personally I get a buzz from receiving "real mail" from family and friends at home. I always keep my letters, and throughout a lengthy deployment if you're feeling a bit homesick you can crawl into your sleeping bag (or bunk bed... depending where you are) and re-read them. Likewise, care packages make a huge difference to morale, and not only of the individual addressee. I always share my goodies with my mates and most people I know do the same.

I guess what I'm saying is, I really appreciate what you and your friends are doing for our deployed troops. I'll make sure I pass the link to my friends. Please pass on my thanks to your mates as well!

Because they are very much appreciated, especially by people who don't for any reason have regular contact with home.

I is for ID

Don't forget to take some photo ID to the post office, or they won't accept your package. You also have to fill out a customs declaration, so no fibbing about the contents!

The postie will type your drivers licence number into the computer when you lodge the package and form, and check that your address matches that on the form and the return address on the package. No ID, no return address - no package sent for you!

I was hoping I could take the lazy way out and have the kids walk the packages down to the post office, but they won't accept anything unless the person lodging the package can show photo ID.

“If ye love wealth better than liberty, the tranquility of servitude better than the animating contest of freedom, go home from us in peace.

We ask not your counsels or your arms.

Crouch down and lick the hands which feed you. May your chains set lightly upon you, and may posterity forget that you were our countrymen.”

Samuel Adams
Posted by kae at 9:10 PM No comments: